An Injectafer lawsuit filed by a New York woman claims side effects of the iron infusion caused her blood phosphate levels to drop to critically low levels, resulting in severe and permanent injuries.

The complaint (PDF) was filed by Allena Osorio in the Philadelphia Court of Common Pleas on November 16, claiming that the drug makers Luitpold Pharmaceuticals, Inc. American Regent, Inc., Daiichi Sankyo and Vifor (international) AG withheld information from users and the medical community about the risk that the iron infusion may cause severe hypophosphatemia (HPP).

Injectafer (ferric carboxymaltose) has been marketed as a safe and effective anemia treatment since 2013, and it is often administered to adults who are not able to manage the condition with an oral iron supplement or have non-dialysis dependent chronic kidney disease. However, the drug makers now face a growing number of Injectafer lawsuits alleging that consumers and the medical community have not been adequately around about complications that may result from the infusion. 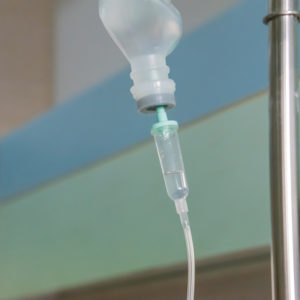 According to the lawsuit, Osorio suffers from iron deficiency anemia, which led to her being prescribed an Injectafer iron infusion in August 2020.

The lawsuit indicates it took her and her doctors years to realize the iron infusion caused her injuries, due to the manufacturers’ intentional efforts to conceal the problems with Injectafer.

“Defendants at no times have attempted to warn users of these risks and have therefore violated their duties to warn and not misrepresent the benefits of a drug,” Osorio’s lawsuit states. “Defendants also have a duty to explain to the medical community how to properly investigate and monitor a sharp drop in phosphorous levels. Defendants at no time have provided such warnings.”

Failure to Warn About Long-Term Side Effects of Injectafer

Hypophosphatemia is an electrolyte disturbance in which blood tests reveal that there is an abnormally low level of phosphate in the blood. However, the risks caused by the condition are not just related to the extremely low levels of serum phosphate, but also can leave users with long-term Injectafer side effects depending on the duration of the problems.

Osorio indicates the drug makers knew or should have known about the risks, but provided false and misleading information for users and doctors, failing to disclose the importance of monitoring and testing after the Injectafer infusions.

It was not until February 2020 that the warnings about Injectafer side effects (PDF) were updated to add more detailed information about the risk of symptomatic hypophosphatemia caused by the iron infusion. However, critics have said even those warnings remain inadequate.